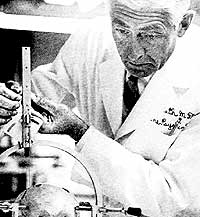 Click here
Video clip (WMV; 26Mb) a Robert Heath patient; of an Olds' rat;
and a discussion of dopamine and the nucleus accumbens

Dr Robert Heath was Chairman of the Department of Psychiatry and Neurology at Tulane University in New Orleans from 1949 to 1980. He performed many controversial experiments involving electrical stimulation of the brain (ESB). In one procedure, Dr Heath wired up the pleasure centres of a gay man. During a three-hour session, the subject, code-named B-19, electrically self-stimulated his reward circuitry some 1,500 times.

“During these sessions, B-19 stimulated himself to a point that he was experiencing an almost overwhelming euphoria and elation, and had to be disconnected, despite his vigorous protests."
[Moan, C.E., & Heath, R.G. Septal stimulation for the initiation of heterosexual activity in a homosexual male. Journal of Behavior Therapy and Experimental Psychiatry, 3, 23-30, 1972.]

Dr Heath believed that ESB could be used to "cure" homosexuality. Insofar as people prefer direct stimulation of the pleasure centres to having sex, ESB can "cure" heterosexuality too.

Some bioethicists believe that the capacity indefinitely to stimulate one's pleasure centres should be recognised as an inalienable human right. Indeed the "pursuit of happiness" was one of the "unalienable rights" of the people enumerated in the American Declaration of Independence. [The other two were life and liberty; liberty feels redundant if one's pleasure centres are stimulated.] However, no neurosurgeons currently offer implants for this purpose. Even victims of intractable neuropathic pain and refractory depression aren't permitted to have their pleasure centres wired. In 2005, the FDA did agree to license a vagus nerve stimulator for treatment-resistant depression; but there are grave doubts whether the implant works as advertised.

Dr Heath's work on mind-control at Tulane was partly funded by the US military and the CIA. Dr Heath's subjects were African Americans. In the words of Heath's collaborator Australian psychiatrist Harry Bailey, this was "because they were everywhere and cheap experimental animals". Following the discovery by Olds and Milner of the "pleasure centres" of the brain [James Olds and Peter Milner, "Positive Reinforcement Produced by Electrical Stimulation of the Septal Area and Other Regions of the Rat Brain," Journal of Comparative and Physiological Psychology 47 (1954): 419-28.], Dr Heath was the main speaker at a seminar conducted by the Army Chemical Corps at its Edgewood Arsenal medical laboratories. Dr Heath's topic was "Some Aspects of Electrical Stimulation and Recording in the Brain of Man." Details of Dr Heath's own involvement in the MK-ULTRA project remain unclear; but Tulane University continues to enjoy close ties with the CIA. Dr Heath also conducted numerous experiments with mescaline, LSD and cannabis.

In November 1962, CIA physician Dr. E. Manifield Gunn allegedly offered Dr Heath CIA funding for study of the brain's "pain center". Dr Heath told the New York Times [Aug. 2, 1977] that he found the idea "abhorrent". Dr Heath said: "I took the stance that if I were going to be a spy, I'd be a spy. I wanted to be a doctor and practice medicine."

Dr Dunn and the CIA deny offering Dr Heath money or seeking to alter the direction of his research.